“What the heck is that thing?”

-Amy to Alex, when The Operator broke into their house in Entry 26 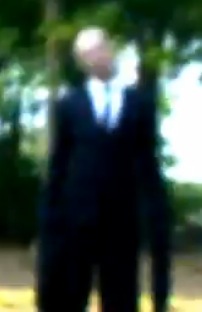 Slenderman also called The Operator in the Entry’s, is what is presumed to be the main antagonist of Marble Hornets, although there is evidence supporting that he may not be what he initially seemed.

Of tall stature and dressed in a business suit, The Operator is nevertheless a very inhuman being; his face is a complete, featureless blank, and his arms have an almost tentacle-like quality to them. He also may have supernatural powers.

The Operator first appeared in Entry #1. His actor has not been revealed.

The Operator seems to be a malicious being, appearing at seemingly random to scare or attack Alex and later Jay. Chronologically, his first physical appearance thus far was in Entry #12, although Entry #37 shows that he has been active in the characters' lives since at least 1991.

Events occurring near the end of Season 2 show him possibly allying with Alex, although the circumstances remain unknown.

While The Operator's actual origin is unknown as of yet, Alex tells Jay of a tale in Entry #41 which may be linked to his existence. Alex says that in an area of what is now Rosswood Park, the flora, particularly the trees, would grow abnormally fast. As punishment, the locals would string up criminals from the trees and let them grow, misshaping the criminals. After the criminals died of dehydration, the locals would burn down the trees, body and all. The practice was suspended when a missing child was found dismembered in the trees.

The Operator is suspected to have many abilities, including teleportation and electronic interference. These two have the largest amount of evidence. Other presumed abilities include mind control and The Sickness.

The name "Slenderman " has thus far never been used in the series; the name was ascribed to the character in interviews by Troy and Joseph. Other than the name of the character The Operator was based on (The OG Slendy Boi), the character has been referred to by fans as all sorts of permutations of the names, including Slendy, TO, and El Hombre Alto (Spanish for "The Tall Man").