Hoody is the nickname of a character in MarbleHornets, first appearing in Entry #41. Not much is known about him, though he may be a proxy or an antagonist. Some theories persist that he could be Totheark, though as of yet there is little to support this.

Hoody has only been seen in a few entries, the most notable are Entry #41 where he first appears, stalking Jay while he sleeps in his car, and Entry #45, where he helps to subdue Alex while Masky tries to kill him with a rock. Hoody and Masky run or flee from something they see in the woods, suggested by some to be the Operator. Some also think that they fled so they would not get in the way of The Operator. Many have also suggested that Hoody and Masky think of The Operator as their master. Those who believe Masky to not be an entirely evil entity believe that he and Hoody fled out of fear of The Operator, as he was coming to Alex's defence. Other theories have Hoody and Masky trying to kill Alex to stop The Operator but when he appeared they obviously had to run away. Recent information as of Entry #60 suggests Tim and Hoody are not on the same side.

Hoody's potentially most important appearance is in Entry #58. In this entry, while Tim and Jay explore the second building, Hoody shows up and strolls by. Tim doesn't recognize him, however Jay takes off after him. He is led to a building wherein there are multiple pumps and a maintenance tunnel. Although he loses Hoody, he is almost certain that the pump house is where Hoody escaped too, but is unable to follow him as the passage is solid darkness and Jay did not bring a flashlight.

When Jay goes back to the hospital in Entry #60, he finds the room that Hoody had exited back when he chased him. Written on the walls is "He is a LIAR" and "Follow Me". Jay takes this to mean follow him to the maintenance tunnels from last time (as Hoody doesn't appear in this Entry). When Jay enters the maintenance tunnels, he stumbles across medical documents aimed at a Timothy. He takes the documents, and a small doll, and flees for his life from The Operator. In Entry #60.5 we learn that the folder containing the documents has what appears to be a stylized drawing of Hoody's mask on the back. The folder also contained a photo of Tim and Jay during their argument in Entry #59 with "WATCHING" written in the back. The fact that the "Reference" totheark video contained audio from said argument, lends further credibility to the theory of there being a connection between Hoody and totheark.Hoody also shows up in Entry #61 stalking Tim and taking his pill bottle.

Hoody's connections and intentions are not yet known or clear.

It is also debated that the figure leaning against a tree in Totheark's Youtube admission, "Intermission" is Hoody. Sharing the same distraught face, the text in Intermission states "Did you see me?", then displaying the figure at the tree. It is also said that a figure is present sitting at a tree in the distance of one of the entries, but nothing is currently set in stone.&nbsp 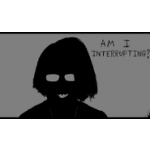